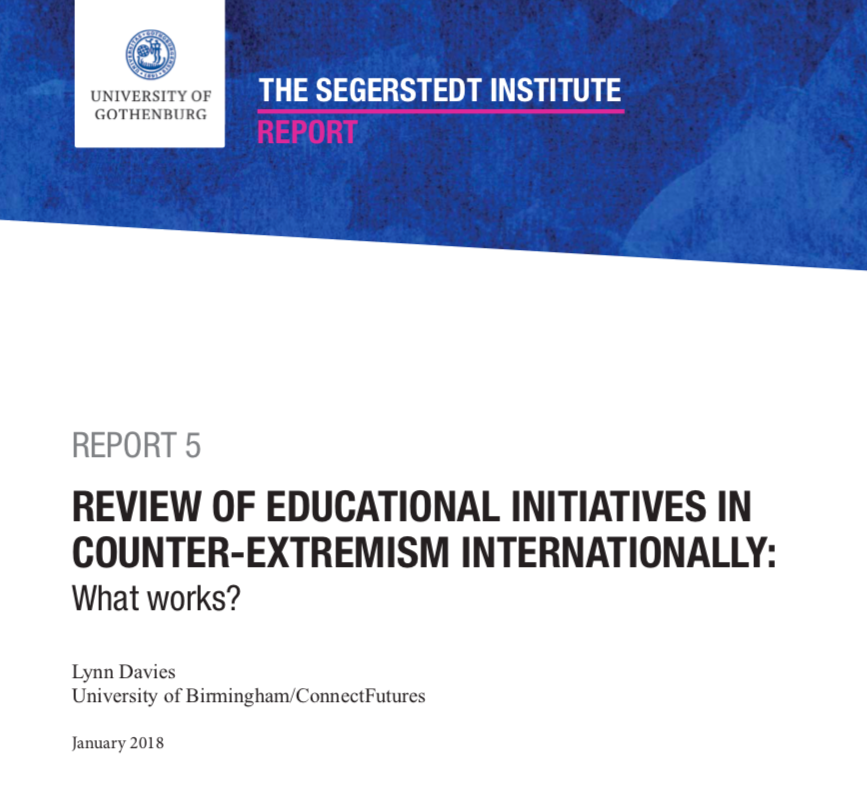 What works in educating against extremism? My report for the University of Gothenburg.

When it comes to educating against extremism, two fundamental questions inevitably arise – what works, and how can we measure it? Eight key principles of effective PVE (Preventing Violent Extremism) emerge from an extensive global review I have just completed,  commissioned by the Segerstedt Institute of the University of Gothenburg. They were interested in what educational institutions in different countries were actually doing in terms of educating against extremism, and what evidence was available on what works. Those of us involved in education see a lot of prescription out there about what schools ought to do, and some collections of ‘good practice’, but this was the first time a major review has examined in order to categorize the wealth of ongoing different initiatives globally.  It was a fascinating endeavour.

From 23 countries in Europe, US/Canada, Africa, Middle East and South East Asia, I identified 20 different entry points for interventions (although of course many overlap).  These included direct approaches to tackling extreme Islamist or Far Right radicalization, and more indirect ones using intergroup contact, dialogue, integrative complexity, moral disengagement, conflict resolution or diverting youth into sport or arts.  I looked at whole school value systems such as Rights Respecting Schools or Philosophy for Children, as well as religious education and PHSE.  Also included were interventions inviting former extremists to tell their stories, or using multi-perspective history and the holocaust to understand propaganda.  Digital literacy is also frequently tackled.   In countries facing poverty, initiatives that improve economic opportunities and civic engagement can make the pull of extremist groups that promise money or status less appealing.

Every initiative will have an explicit or implicit theory of change – some assumption that participants will be more tolerant, will understand their or others’ religion, will have greater self-esteem, will be able to critically analyse messages, be more resilient to radlicalisers and so on.  But evaluations in this area are notoriously difficult.  While a project can have measurable effects on attitudes or knowledge at the immediate moment, long term impact can rarely be demonstrated.  Too many variables intervene, not least a renewed outbreak of conflict or violence. Yet the report was able to extract some principles of what seems to work, or the minimum that is needed to have any impact at all.

So, what initiatives in PVE work best?

PVE work has in fact to be wary of the notion of an ‘intervention’, with the implication of a one-off attempt at interrupting a negative pathway towards radicalisation, and should be more about building a permanent culture in schools where resilience to extremism is just one aspect of a fuller learning of rights, history, religious and ethnic conflict, and community dynamics. PVE work is also about promoting habits of active citizenship in terms of tackling injustice and grievance through non-violent means.

Check more details  of our resources, workshops (staff and students) and videos on www.connectfutures.org