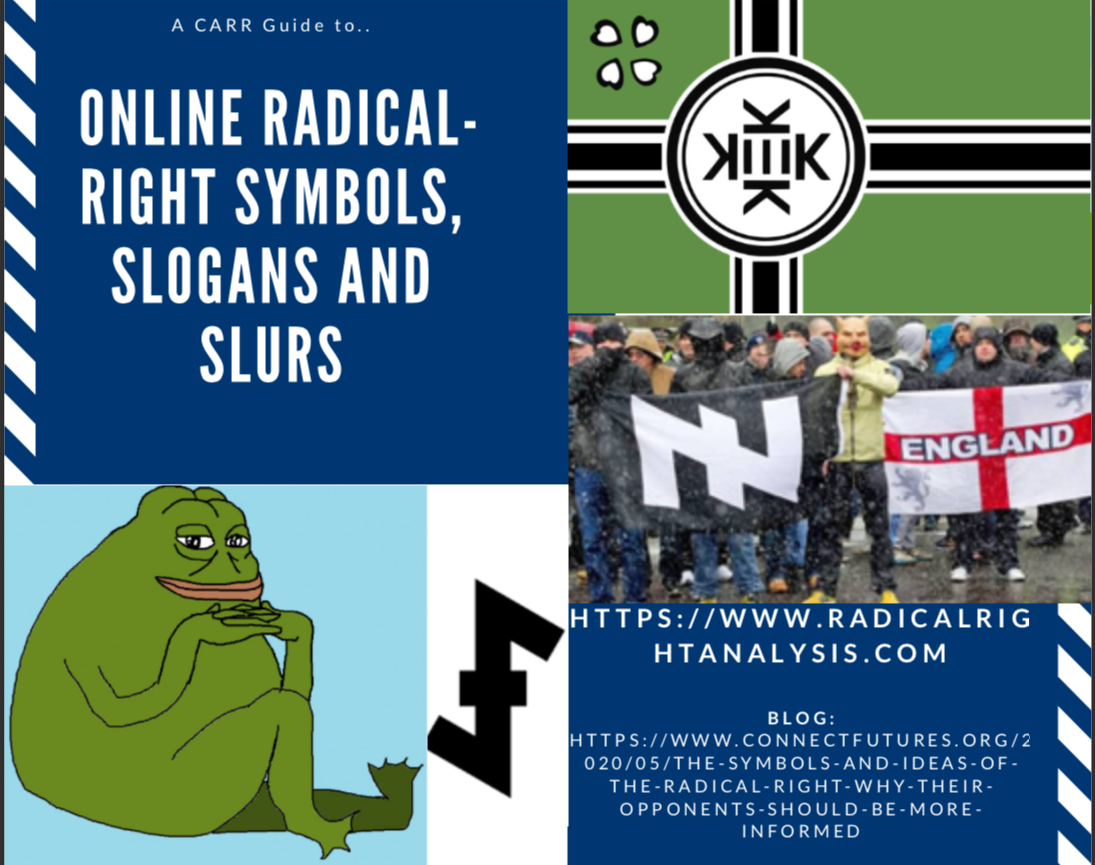 The Symbols and Ideas of the Radical Right: Why Their Opponents Should be More Informed

Social media, message boards and other online fora have become key means through which the radical- and extreme-right share ideas, ideological messages and, so, mobilise themselves and their supporters. However, because their political aims are offensive, discriminatory and often illegal, they communicate using words, phrases and images that many people wouldn’t initially understand. We can think of these codes as a cache of double-edged signs – words and images with more than one meaning. Such double-edged signs may denote one thing but, through their use by extremists and their function to extremist political aims, they connote other things too. Even some of the more longstanding, and widely used, of these signs – Pepe the Frog, or the triple parentheses indicating (((echoes))) – are only understood in outline: the online public recognises that they signify a reactionary political project, but may not quite understand why that is. Why, for example, has a badly drawn frog become associated with the xenophobic politics of the Trump White House?

In order to understand the politics of the radical- and extreme-right we need to understand how they communicate – we need to be aware of the kinds of ideas, stories and images that they share, and what these mean, so we can oppose them when we see it. Through CARR, we were recently commissioned by Facebook to provide a research report and glossary which aimed to do precisely that: to assemble, summarise and contextualise the most significant radical-right signs for a general audience. Here, we summarise a few of our findings.

A note on political extremism

We want to acknowledge at the outset that there is, of course, diversity of the radical right – from a mainstream that’s capable of working with business and establishment conservatives in order to create xenophobic state policy (Trump, Bolsonaro, Modi, etc.) as well as a more uncompromising fringe. Both share a cluster of ideological features: extreme or ultra-nationalism; racism; xenophobia; ethnocentrism; antisemitism; anti-communism; demand for strong law and order/a strong state; opposition to the principles of human equality; anti-democracy/anti-liberalism. The fringe, in contrast with the mainstream’s readiness to cooperate with business interests, is frequently environmentalist and sees global industrial civilization on the verge of collapse – though, given its racist worldview, solutions to environmental crisis tend to come down to saving White people/nations, at the expense of others.

However, a key difference between the radical/populist right and the extreme-right is their willingness to use extra-state violence against political opponents and “racial” enemies. The extreme-right embrace violence (whether fantasies of expanded state violence should they come to power, and terroristic, individual violence in the here and now) in order to promote an ideological agenda and this ideological agenda is, typically, a variation of fascism or neo‐Nazism. Violence – in the form of intimidation, orchestrated physical attacks, paramilitarism, extermination and (in extreme cases) genocide – always features as an integral dimension to fascist political action. These are the goals to which the extreme-right are committed, and these goals are represented – in a euphemised, coded way – in their discourse. These codes can be visual, linguistic, or conceptual in form and so here we present an example of each.

John E Richardson is Adjunct Associate Professor of Language & Linguistics in the Dept of Communication and Creative Industries, University of the Sunshine Coast. His research interests include critical discourse studies, rhetoric and argumentation, British fascism and commemorative discourse. He is Editor of the international journal Critical Discourse Studies.

Dr. Matthias Wasser’s research focuses on international political economy, social movements, nationalism, economic policy, and historical sociology. He has presented his work at numerous conferences, including the annual meeting of the American Sociological Association (ASA). He serves as a Senior Fellow for the Centre for Analysis of the Radical Right, where he contributes to disseminating information about the radical right.

The Wolfsangel is a symbol representing a stylised section of a wolf trap. Though some commentators suggest that it is runic, in fact the Wolfsangel sign does not belong to any particular runic tradition and may have originated in a heraldic use.

Along with many other symbols related to a largely invented Teutonic (and ‘Aryan’) tradition, Nazi Germany appropriated the Wolfsangel, using it in the divisional insignia of several Waffen-SS units, in addition to the Sturmabteilung (SA) and Hitler Youth.

A variety of political parties and groups have adopted the Wolfsangel as a way of signalling their commitment to neo-Nazi politics, without resorting to the obvious Swastika. In the United States, the neo-Nazi group Aryan Nations incorporated the Wolfsangel into their logo and in Ukraine the symbol is used by the fascist militia Azov Battalion (now called the Azov Regiment). The symbol has also been used on flags and clothing during marches of extremist groups in the UK; for example, Britain’s so-called ‘Infidels’ (who split from the English Defence League).

These acronyms communicate violent fantasies, typically fantasies of mass murder. DOTR stands for ‘Day of the Rope’ and DOR stands for either ‘Day of Reckoning’ or ‘Day of Retribution’. The ‘Day of the Rope’ is a radical-right fantasy that, at some time in the future, ‘justice’ will be served to those who entered into mixed-race marriages and similar acts of ethnic ‘treason’. Typically, this ‘justice’ involves a public hanging of everyone the radical right perceives as enemies. The terroristic organisation Atomwaffen Division use such terminology in propaganda depicting violence against their opponents. The term was taken from a passage in William Pierce’s (1978) novel, The Turner Diaries. The novel’s heroes lead a fascist revolution in the US where, among other atrocities, those in mixed-ethnic relationships are hung from lampposts. ‘DOTR’ has long been used as shorthand for the desire for white-supremacist revolution, and has been disseminated by openly neo-Nazi groups ranging from The Daily Stormer to the more extreme Atomwaffen Division in the US and, in the UK, by National Action and its splinter movements such as the now-proscribed NS131 and Scottish Dawn.

This concept is used by white nationalists to refer to demographic changes which they believe lead to a reduction of the percentage of the white population, including nonwhite immigration, intermarriage between whites and nonwhites, and white birthrates being below those of other groups. Unlike all other known forms of genocide, which typically involve forced movement, restrictions on reproductive freedom, and violence, they argue that “white genocide” results from the freedom (most prominently of whites themselves) to move, marry, and reproduce as they wish.

A number of social processes are attributed to a conscious program that sees the reduction of the white population as its goal, and emerges from some force powerful enough to more or less consciously control culture, state and corporate policy, individual preferences, and so on. This malevolent force is frequently equated with the figure of an organized Jewish conspiracy (or in superficially more sophisticated accounts, the spontaneous malevolent actions of Jews in general), even though Jews in most Western countries are also declining as a percentage of the population through intermarriage, lower birth rates, and non-Jewish migration.

Sometimes, white supremacists raise Japan’s highly restrictionist immigration policy as an example to show that (1) this conspiracy is real, and (2) people are hypocritically condemning whites for restricting immigration to “their” countries when “nobody” criticizes Japan for the same thing. But this example, in fact, proves the opposite of each of these. For Japan’s restrictionist immigration policy hasn’t done anything to increase Japanese birthrates, which are low in spite of the presumed absence of a Jewish conspiracy to depress them; and this policy and Japanese nationalism is criticized, most obviously by Japan’s Korean minority and political left, but also by non-nationalists generally.

The “Great Replacement,” is very frequently cited by the terrorist fringe, because it reframes peaceful decisions of people to move,  marry, and have children or not as “genocide,” and therefore actual mass murder as a perverse form of self-defense. However, as an organizing frame, it also has legs on the electorally successful flank of the radical right. When US Congressional representatives say that, for instance, “we can’t restore our civilization with someone else’s babies,” they act as vectors to smuggle these ideas from the terrorist fringe into the mainstream of political discourse. Although the fringe and the “moderate” radical right can be understood distinctly, they aid and influence each other.

The symbols of the radical- and extreme-right are constantly evolving and so, as a bestiary of symbols, we acknowledge that some of our report will be superseded by the linguistic landscape of extremist subcultures. Meme formats created by the alt-right, for instance, have been appropriated by their opponents just as readily as visa-versa. Similarly, the Covid-19 pandemic has generated a whole raft of conspiracy theories, with associated vocabularies. However, we hope that our report offers insight into the overall structure and function of such symbols and the ways that they develop, particularly in dialogue with changing social and political contexts.

Of course, many people may never be persuaded by the radical- or extreme right, either because they’ve internalized broad humanist principles or because of a base, intuitive disapproval of their politics, or both. But given that our society is structurally driven to engender alienation, especially alienated young men, we always need to be aware of the dangers of radicalisation. We can’t expect democratic or egalitarian principles to be internalized instantly, nor can we expect our own opposition to reactionary, and violent, political subcultures to always get the better of others’ curiosity. Given these social realities, it is vital that organisations like CARR continue to provide accessible materials that practitioners, academics and the wider public can use to evaluating the ideas and arguments of the radical right. We are very proud to have contributed to this, in our small way.

TO READ THE FULL REPORT PRODUCED BY CENTRE FOR ANALYSIS OF THE RADICAL RIGHT (CARR): CLICK HERE