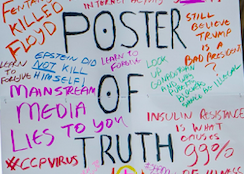 Blog: Plague, prejudice and protest: what are the educational responses in a pandemic world?

A version of this blog was first published in the UNESCO Asia-Pacific Centre of Education for International Understanding Insights series, September 2020

Writing in September 2020, one’s gaze both backwards and forwards is unprecedented.  Because of Covid-19, the past few months have seen an almost unique upheaval globally; the future is unknown but likely to be equally unmatched.  Across the world, schools stayed partially open or migrated online, people have lost jobs and livelihoods, and the harsh economic and social impact is yet to be evaluated.  ‘Recovery’ and ‘normality’ are only visions.  So how can we even begin to make prescriptions about what education should do – nationally let alone globally?  I offer three imperatives, relating to racism, inequality and social action – based mostly on not making things any worse, while possibly sharpening up educational responses to turmoil.

Nationalism, racism and extremism: the spread of an infodemic.

Any emergency generates fear, threat and a culture of blame.  Conspiracy theories abound regarding who (bats?), what (5G?) and which country (oh, China?) is responsible. So educational efforts on media literacy and fake news have a key importance now.  Habits of questioning what is read and seeking for evidence become vital.  The great problem in Covid-19 times is that the ‘evidence’ seems to change (whether face coverings protect people, what exact social distance is necessary, whether a vaccine is possible).  There is a growth of an anti-vax movement, as we saw with measles and, in some countries, polio:  the role of education is to dissuade against knee-jerk reactions based on fear, and to encourage scrutiny of available science.

Frighteningly, we are seeing greater explicit racism and prejudice – when the Chinese are blamed, there can be attacks on anyone who is or looks Chinese.  In US, many individuals, particularly those from East Asian backgrounds, are reporting more experiences of racism and xenophobia.  A survey in Canada in June revealed that almost one-third of Chinese Canadians report being physically attacked during Covid-19.  In parts of Europe, there is racism against Roma communities as disease spreaders.  This is the collective danger—a license to unleash racism against stigmatized groups.

And what is happening is that extremist groups are using the opportunity to spread their hatred.  This is part of what the World Health Organisation calls an ‘infodemic’ – the massive spread of misinformation and cybercrime relating to Covid-19.  The Commission for Counter Extremism in UK published a report on July 9th revealing how hateful extremists of all spectrums, including neo-Nazis and the far right, have been exploiting the pandemic to launch broad misinformation campaigns that aim to sow social discord.  They have promoted racist and xenophobic narratives on social media platforms to incite violence against minority groups, such as urging their supporters to intentionally infect Jewish and Muslim populations with the coronavirus.   Other groupings have also been labelled by neo-Nazi groups as a danger – whether refugees, LGTB people or elites. Recent examples include members of the far right “Britain First” group turning  up at hotels that are housing migrants, filming their reactions and then sharing the footage online  .  In cities across the UK, fringe extremist and fringe “health groups” are mingling dangerously in this infodemic.

Conversely, from Islamist groups the apportioning of blame is varied. The US ‘crusaders’ are held responsible, for a wave or atheism and immorality that has allegedly provoked punishment by God in the form of the pandemic.  ISIS is telling terrorists to steer clear of coronavirus-stricken Europe. Those who believe they might have contracted coronavirus are told to stay away from areas under ISIS control in order to preserve the health of others and fulfil the holy “obligation of taking up the causes of protection from illnesses and avoiding them.”

Elsewhere, an Islamic State group online publication in India has called for its supporters to spread the coronavirus, saying “every brother and sister, even children, can contribute to Allah’s cause by becoming the carriers of this disease and striking the colonies of the disbelievers.”   In Nigeria, the leader of the Boko Haram breakaway faction of extremists has released an audio clip claiming that his brutal version of Islam was an “anti-virus” and portraying social distancing measures that have closed mosques as an assault on the faith.

Hence international media literacy has an intensified role of enabling young people to work their way through the mass of conflicting messages and politicised strategies on a pandemic.  Teachers need support in their role of recognising hate speech and how to report it, whether on-or off line.   Students need support in recognising misinformation, open or hidden xenophobia and the tactics of extremists.

It is becoming clear that educational inequality – and hence general inequality – is exacerbated by Covid. While schools across the world have been trying to maintain some educational contact through on-line teaching, it is feared that children already disadvantaged will become more so.  This includes those who do not have access to the internet, or where a family of eight shares access to the sole mobile phone, or, as always, where there are no reading materials in the home.  Public libraries are shut.  While innovative work is being done through TV and radio, this requires electricity, and UNICEF report that less than 10% of the poorest households across the world have electricity.  School closures mean the dual problem of lack of protective education against radicalisation and extremism, and, with inequality, the exacerbation of grievance and the lure of extremist groups promising livelihoods and a future.

With the economic impact of Covid-19 we will see increased migrations and numbers of refugees. Children who are displaced across or within borders already are more likely to have their education disrupted.  Refugees can be stigmatised.   Organisations such as UNICEF and Mercy Corps have been ‘reimagining’ education and devising a whole array of platforms to deliver lessons and find inclusive learning apps.  Africa Educational Trust finds not just innovative ways to protect and continue child-centered pedagogy, disaster planning and resilience – including safe back to school measures post-Covid and protection of vulnerable children and adults – but also provision of food.

But girls are still at most risk.  Without the protective school environment, COVID-19 menaces their education, health and well-being.  With increased poverty among families and limited social protection, parents are increasingly likely to marry their daughters at a younger age as a negative coping strategy. This increases the risk of female genital mutilation (FGM) and child marriage, and subsequent permanent dropout from school. Families in Somalia are taking advantage of school closures to carry out FGM so that girls have time to recover from the ritual, which can take weeks.  And FGM of course takes place in many other countries, including wealthy ones.   In UK, the NSPCC receives thousands of contacts regarding FGM, with an increase of 36% just last year.  The protective role of schools is at a premium. Vigilance is so much more than just stressing handwashing and social distancing.

Finally, we are seeing a confluence of the impact of both Covid 19 and protest movements.  The Black Lives Matter movement has swept across many countries, with different facets – from statues of slave traders being toppled, to exposure of how BAME (black and ethnic minority) people are more likely to be affected by Covid because of historic racism and deprivation, differential access to health care. and differential representation as front line workers in hospitals and care homes.     In parts of Latin America, Covid-19 initially dampened down protest movements – for social media cannot replace social mobilisation –  but they are likely to re-emerge with increasingly vulnerable and disaffected populations.

A new analysis by Verisk Maplecroft, a global strategic consulting firm predicts that protests are likely to surge globally.  The economic shock of the pandemic coupled with existing grievances makes widespread public uprisings ‘inevitable’.    37 countries, mainly in Africa and Latin America, could face protests for up to 3 years.  But the risk of unrest in other countries including India, Brazil, Russia, South Africa, Indonesia and Turkey are only slightly less acute and still constitute a threat to stability.  In 2019, Maplecroft recorded 47 countries with a significant uptick in protests, including Hong Kong, Chile, Nigeria, Sudan and Haiti. It predicted more turmoil in 2021.

Making sense. Talking to students in an age of unrest.

When schools fully reopen this may be to a new world of unrest.  Teachers need to be aware of how protests are triggered, and how to discuss with students both causes and effects of protest.

Civil disobedience takes different forms and is responded to in different ways in different countries; the responsibility of teachers is to try to keep students safe yet at the same time not avoid discussion of the roots of conflict or grievance and what protest does or does not achieve.  This includes warnings about how protest movements get hijacked by extremists: for example, the white supremacist Far Right has seized the opportunity to mount counter protests about ‘White Lives Matter’, with inevitable outbreaks of violence, across groups and with the police.  A new concern is the age of the leadership of neo-Nazi groups, one now spearheaded by ‘The British Hand’, believed to be 15, and recruiting 12 year olds.  The stress on contextual safeguarding is paramount here – awareness of how groups are operating in a locality as well as on the internet, and the cross-overs between racism, knife crime, gangs and extremism.

Some good links I’d recommend include:

The intersections between racism, inequality and violent protest have been amplified by Covid-19.   The role of schools has become equally intensified.  On the one hand they have an opportunity and responsibility to build on any benign aspects – that many communities have actually demonstrated greater coherence, providing food and supporting each other across ethnic, social class and age lines.  Schools and agencies across the globe have had to develop innovative ways of accessing the “hard to reach”.  Yet major challenges remain and will get worse.  It is vital that schools continue to fight hate speech and propaganda, enable young people to extend skills and vigilance in what they read on line, and not thinkingly or unthinkingly contribute to racism, anti-Semitism and Islamophobia through what they themselves post, what they share or ‘like’.

Yet the task is more than media literacy.  The slogan of the Holocaust Memorial Museum is highly relevant here:  ‘What you do matters; what you fail to do is critical’.   In times of social unrest, an informed political and citizenship education becomes central:  how to protect self and others, how to protest against injustice or corruption, and how to create social change without violence.

We deliver workshops for Y5 -Y11  students on Fake News, Extremism & the Truth